Why Miner’s Day is So Important

Posted by Chris Broughton
on 2 December 2014 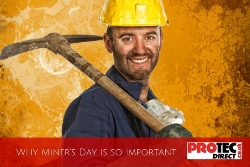 This 6th of December once again sees the celebration of Miner’s Day. It’s a time when we are all reminded of the hard work, sacrifice and risk that many millions of people around the world have faced, and still do, working in mines.

Miner’s Day was created back in 2009 and is always celebrated as an unofficial public holiday. Mining is a noble, tough and very dangerous profession and we should never forget the tragedies and appalling conditions that so many miners suffered in the past.

Although here in the UK and in the US, where Miner’s Day originated, mining is an industry that is a fraction of the size it used to be, there are still thousands of men who work underground in the pursuit of essential materials. Coal and other fossil fuels might not power the country as they used to but we should not forget the people who worked to bring it up from the ground. Just as we remember those who died in conflict, with this year being especially pertinent because it’s the centenary of the First World War, we should also never forget the countless lives lost in mines.

Of course, it was only a few years ago when in Chile we saw the perils faced by those who still work underground. Thirty-three men were buried and trapped below the surface. The world held its breath as everything possible was done to bring them out again. Conditions in the UK and other western countries may have improved thanks to legislation, but around the world, many brave men and women face the dangers of mine work every day. This is another reason why Miner’s Day is so important.

Since the days of the industrial revolution and the need for coal inspired a booming mining trade, many people fought for better conditions for mine workers. Anyone wanting to know how hard life in a mine could be, George Orwell’s Road to Wigan Pier gives a harrowing first hand account of exactly what it was like. Conditions and equipment may have improved, as did the pay, but it was and still is a difficult and arduous job.

The world still needs raw materials in order to make the things we take for granted each day. Our mobile phones, tablets and almost every other domestic item requires materials that have to be dug out of the ground. The most visible side of mining may have almost disappeared from the UK but new methods still require mine work. And in other countries people still face the prospect of long and dangerous days in the mine.

So, this 6th of December, spare a thought for the mine workers past and present who toiled and even died so that we could enjoy a better life. It really is the least that you can do.