What does the new Deregulation Bill mean for health and safety 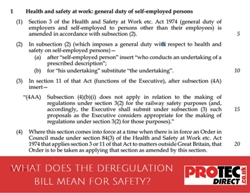 First announced in the Queen’s Speech in 2013, the proposed Deregulation Bill is set to exempt some self-employed people from health and safety legislation. The bill has been based on a report by Professor Ragnar Löfstedt commissioned by the UK government to review the health and safety law back in March 2011.

In his report, entitled Reclaiming Health and Safety, he suggested removing certain responsibilities from self-employed people providing they do not pose a risk to others in a workplace.

Critics of the new bill and the research have pointed out that if this is intended to apply to people who only work on their own, then they are in essence only protecting self-employed people from being prosecuted if they injure themselves. It does seem to be rather self-defeating to prosecute someone who has posed not threat to anyone else but has only injured him or her self, and in fact, no such case has ever been recorded.

So, why the need for the change in the law?

If a self-employed person was prosecuted for causing risk or injury to someone else, then this would surely be self evident proof that they did pose a risk and would not be exempt from the law in the first instance. It seems to be a case of using pubic money to protect people from a situation that has never actually occurred up to this point.

In a submission made by Unite the Union providing damning statistics to the Health and Safety Executive, it was revealed that self-employed people are twice more likely to be killed than employees. With a fatality rate of 1.2 per 100,000 for self-employed against 0.5 per 100,000 for employees, the difference is significant.

Many self-employed people work in hazardous industries, such as agriculture and construction, where the term self-employed is slightly misleading. They work on sites, and with other people around. In fact, in many instances they are to all intents and purposes employees but with fewer rights.

Some companies even use self-employed freelancers to limit their expenditure on taxes and employer responsibilities. This method of using self-employed workers even extends to nurses and doctor in hospitals, and if there is a clearer example of someone being responsible for someone else’s well-being then it is hard to imagine.

The removal of certain parts of the 1974 Health and Safety Act by this new Deregulation Bill seems to be creating a minefield of confusion where there doesn’t need to be one. Those who are self-employed may not fully know whether the law applies to them or not in certain situations. Those who presume they are exempt may act accordingly and could risk endangering others in turn. This could have disastrous consequences in the long term.

The aim of all health and safety regulation is to protect all workers, not just those who happen to be employed in the conventional sense. It seems strange to adapt a law that doesn’t need to be adapted (given the lack of precedent of prosecuting oneself), and this may lead to little but an increase in confusion.

Health and safety in the workplace has long been going in the right direction, so why do anything to alter its course?