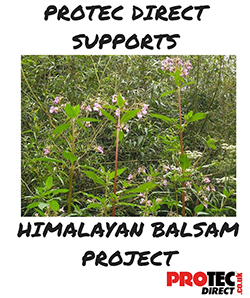 Protec Direct has shown its support to the latest Himalayan Balsam Project by supplying PPE equipment to volunteers, allowing them to safely carry out vital conservation work on some of the UK’s most beautiful waterways.

The Himalayan Balsam project ran by the Inland Waterways Association has been responsible for restoring 500 miles of waterway since 1946, protecting, maintaining and restoring inland waterways in England and Wales from the destructive flowering plant, the Himalayan Balsam.

Despite its attractive appearance, the Himalayan Balsam causes havoc to river and canal banks where its presence causes excessive erosion and increased flood risks. The plant interferes with natural relief by crowding out native plants along river and canal banks during its flowering season, but its lack of presence in the winter leaves the banks bare and exposed.