Hi-vis: How does it work

Posted by alona zakharchenko
on 11 July 2019 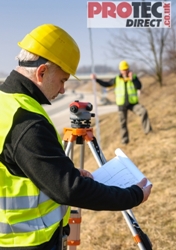 High-visibility clothing, or hi-vis as its better known, is a form of protective clothing that’s made from fluorescent material with reflective tape or shapes added for extra visibility. It’s used to make the wearer more visible to those around them. This much we can legitimately assume you already knew.

However, you might not know exactly how it works at both a physical and interpretative level. You might not realise either exactly how successful and important it has been in the fight against workplace injury, road safety and cycling safety. So, we’re going to address each one of these points in turn and shed some light (if you’ll pardon the pun) on the issues.

How does hi-vis work?

Essentially, the sun’s ultraviolet rays react with the fluorescent colours of the material to create a glowing appearance. The effect of this glow is stronger at times of poor light, like dusk and dawn. However, it can also work using ultraviolet light from other sources, such as car headlamps.

Hi-vis clothing comes in a range of colours, including red, pink, blue and green. However, for safety purposes, it is often the most effective fluorescent colours such as yellow and orange are used.

Which colour of hi-vis clothing to choose is an important factor when you’re buying it and it can impact how effective it is. For example, lifeboat crews use orange reflective vests as this is the most visible colour against the dark blue or black background of the sea.

What is hi-vis clothing made from?

Hi-vis clothing is made from reflective materials, giving it its light-reflecting properties. There are two main materials used in the making of hi-vis clothing – micro-prismatic tape and glass bead reflective tape.

Micro-prismatic tape is made of a special type of plastic vinyl that contains a large number of small prisms. These prisms inside the tape bounce light around internally before reflecting it back at the source. The light that’s reflected from this material travels far and holds its intensity well as it’s concentrated in one direction.

Glass bead reflective tape is the more common type, and it’s the material used on the silver-grey strips that are common on commercial hi-vis clothing. It’s more affordable but reflects light from a source at a wider angle which means that it doesn’t travel as far as the light reflected from micro-prismatic tape.

It’s 50 years since the first hi-vis clothing was issued to railway workers here in the UK. Since that early experiment, hi-vis clothing has expanded to cover the mandatory use of hi-vis workwear on buildings sites, the required possession of hi-vis jackets or vests in your car in case of breakdowns, and the widespread adoption of the material by cyclists, horse riders and other road users.

It’s safe to say that the initial experiments were a success. According to a recent report in The Guardian newspaper, even politicians love wearing hi-vis gear on photoshoots as it makes them look ‘industrious and life-saving’.

The timeline of hi-vis clothing is as follows:

·        1940s – The US government used similar technology to help prevent friendly fire and to use as signals for airplanes above in WW2.

Statistics from 2012 in the UK showed that 2,091 cyclists were either killed or seriously injured on the roads. The most dangerous times of day were found to be between 7am and 9am and then between 3pm and 8pm. These happen to coincide with two very important parts of the day: dawn and dusk (the times when light is diminished) and rush hour (the time with the most traffic on the road).

At these times when there are more road users and their eyes are adjusting to the changing light conditions, it is essential that cyclists make themselves as visible as possible by using both hi-vis clothing and reflective material.

There’s lots of PPE that should be worn on a construction site, but hi-vis clothing is one of the most important considerations.

On building sites and construction projects, heavy materials are often moved around, often with lines of sight obscured and limited space. Wearing hi-vis clothing in this environment allows drivers, crane and other heavy machinery operators to easily spot colleagues and observe movement. It also has the added effect of identifying who is working on the site and who isn’t.

So, as you can see, the effectiveness of hi-vis work and roadwear is very important and has been responsible for saving countless lives and preventing even more accidents. Make sure you invest in the right hi-vis clothing and equipment to keep yourself safe, no matter what it is you’re doing.