Hazards in football: staying safe while watching and playing the beautiful game 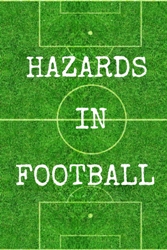 More than art, politics and even religion, football has a way of uniting all the people of the earth like nothing else. This summer of 2014, billions around the world will watch the FIFA World Cup in what has become one of the only truly global events.

Yet, despite all of this positive energy, unity and enjoyment, the beautiful game is not without its dangers and risks. As has happened countless times and will surely happen again this summer, injuries are common place and players are required to be stretchered from the field of play. Some will be making more of their pain than others in attempt at gamesmanship but others will be seriously hurt.

In top level physical sport such as this, people can get cut, sprain and break bones, and occasionally worse. Which is why solid footwear, shin pads and the removal of jewellery are necessary.

However, it is not just on the pitch that hazards exist in football. Having so many people in such a confined space is always risky. Unfortunately, within football there is a litany of disasters involving supporters. Perhaps the most famous is Hillsborough, where 96 Liverpool fans died when poor policing led to many fans being crushed. Also in the 1980s, the Heysel Stadium Disaster saw the collapse of a wall and death of 39 Juventus supporters, and injury to 600 more.

It was these tragedies and more that saw the ordering of the Taylor Report that led to all-seater stadiums and better policing and crowd control at games in the UK. Although no major disasters of this scale have happened in the UK since, football game are still not without their incidents. Which is why increased policing and stewarding, with suitable high-visibility clothing are a permanent fixture at all football games today.

In 1985, an old wooden stand at the ground of Bradford city caught fire during a game, resulting in the death of 56 people. The fire had started after a build up of litter under the main stand caught fire when a lit cigarette was dropped onto it. The small fire spread incredibly quickly thanks to the wooden nature of the stand and high winds. Within four minutes the entire stand was in flames and collapsing, with many people trapped behind it while trying to escape.

Again, although this terrible tragedy claimed so many lives, it did force the football authorities to investigate how such a thing could happen. Modern football stadia are designed so that they can be evacuated very quickly and built with non-flammable materials to prevent disasters such as these.

Whenever you play or watch football, you hope that it will be an overwhelmingly positive experience. However, there are hazards and while many have been addressed with better building methods, safety equipment and protective clothing, there is always a risk when playing or watching.

Let’s hope this summer’s World Cup goes off without a hitch and can be enjoyed by people around the globe.