Five of the World’s Most Dangerous Jobs

Posted by Chris Broughton
on 7 November 2014 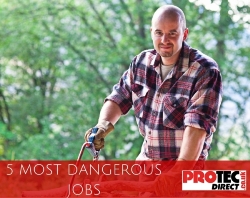 How far would you go just to earn a living wage? Would you venture into the heart of an active volcano, to the tops of towering trees, or to the depths of the ocean – virtually every single day?

If your knees go weak at the mere thought, then one of the world’s most dangerous jobs probably isn’t for you. Allow us to introduce you to just five of the riskiest occupations in existence, and we bet you’ll appreciate the physical safety of your own job just that little bit more.

1. Underwater Welder
It’s a well-known fact that underwater welding is a dangerous profession, but it remains to be enticing for an unsurprising reason – the money. Underwater welders have the potential to earn very comfortable wages, but the job comes with a laundry list of risks that have pegged the average fatality rate at between 13-17%. Drowning is of course one of those risks, but then there’s electric shock, explosions, decompression sickness and even encounters with local marine wildlife, such as sharks and octopuses, to consider too.

2. Lumberjack
You might have enjoyed climbing trees when you were a child, but entering into the lumberjack profession is a whole different game. Lumberjacks are required to scale trees that are dizzyingly high, operate machinery that bears charming names such as ‘widow makers’, dodge falling tree trunks and work in weather conditions that are unstable at best, so it’s sadly no surprise that in the USA, an average of 82 out of 100,000 lumberjacks are killed each year.

3. Sulphur Miner
In East Java, Indonesia, hundreds of men travel each day into the centre of the active Ijen volcano to harvest and carry out enormous chunks of sulphur that is later used in factories worldwide to bleach sugar, make matches and vulcanise rubber. It’s an incredibly hazardous job that is made worse by the fact that the miners do not have access to proper personal protective equipment, such as respiratory masks, which leaves them exposed to burns from molten sulphur and corrosive clouds of toxic hydrogen sulphide and sulphur dioxide gases. And unlike many others of the world’s most dangerous jobs, traditional sulphur mining in Java isn’t well paid. Sulphur miners take home a pitiful $10 -$15 a day.

4. Fisherman
A mainstay on any ‘dangerous jobs’ list, the exact death rates for fishermen vary across the world, but one study by Oxford University found that fishermen were up to 50 times more likely to die on the job than in any other profession. This startling statistic reflects the immense hazards that fishermen face each day, from drowning to choking, collisions and injury, all in the pursuit of a great catch.

5. Farmer
In the UK, being a farmer means taking on the most dangerous job of all. Heavy industrial machinery, unpredictable animals and poisonous chemicals and waste products all add up to a treacherous profession that is said to be responsible for one in five on-the-job deaths. It’s in this occupation that appropriate personal protective equipment like helmets, gloves and boots are crucial, as they could help to reduce the impact of farming injuries or even prevent them altogether.