Posted by Chris Broughton
on 29 October 2014 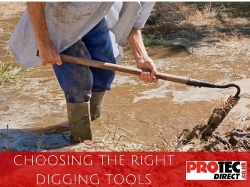 As anyone who works in a trade will tell you (and as the popular maxim goes): having the right tool for a job makes a very big difference. And when that job happens to be as physically tough and demanding as digging, then this is certainly the case.

Whether you’re digging in the garden, moving earth or gravel, or carrying out some serious excavation, there are numerous different tools for doing the job properly.

At the top end of the scale we have the heavy machinery. Mechanical diggers were introduced around 50 years ago or so and revolutionised the way digging was carried out at an industrial and commercial level. Major brands like Caterpillar are recognisable the world over and have made earth moving jobs significantly easier. However, it’s not just the large-scale machinery that uses mechanisation to dig, There are many smaller backhoes and excavators that can be used for smaller projects, and because these can be rented, you can still keep costs down.

It’s obvious that pneumatic and mechanical digging tools have changed some jobs forever. But there are still plenty of occasions when a simple hand held shovel, spade or fork are the only real option. The mistake that many people make is to think that all shovels are the same. This is where blistered hands and slow progress so often come in to the equation. Shovels, like the teeth in your mouth and knives in your kitchen, are all designed to do very specific jobs. Just like spreading butter with a steak knife is not so easy, using a flat end shovel to break ground is going to make things tricky.

Shovels differ in a few key areas. As mentioned above, the digging end varies between being very flat and rounded almost to a point. The more pronounced the point, the easier it will be to break ground and dig down. However, pointed shovels are not particularly good at scooping, lifting or moving. The bucket of the shovel also affects load capacity. With flat digging spades differing wildly from flat pointed shovels in terms of bucket size.

Once you’ve identified the right kind of shovel for the job, you also need to bear a few other things in mind. Firstly, clean shovels work best. Any debris or dried on materials reduce the impact and effect of a shovel, so a good rinse after use is recommended.

As stated above, shovelling and digging can be hard on the hands so a good pair of gloves is recommended to protect them. It’s also a very good idea to wear some solid boots with ankle supports and preferably some toe caps. It might seem unlikely but plenty of people have injured themselves badly by trying to dig through their own feet by accident.

Depending on the material you’re working with, a dust mask and goggles might also be appropriate. So make an assessment before starting about what tools are required.