5 reasons to join a trade union 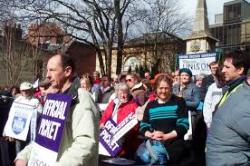 In Britain today there are around 23 million people in paid employment and most of them will spend around a quarter of their lives at work. This means that making sure the workplace is a comfortable, safe, enjoyable and productive place to be is very important.

Back in the early days of industry and employment workers were often exploited, treated unfairly or worked in dangerous environments. The unions were formed as a collective response to this treatment and throughout the centuries, large gains were made.

Today, while most employers treat their staff well, mistakes are still made and things overlooked. So, the unions are just as important as ever in ensuring everyone is treated fairly. Taking on a situation by yourself, against a company with vast resources, can be very daunting. It is always best to have strength in numbers, and that essentially is what unions are about.

Here are five more very good reasons why it’s a good idea to join a union.

1. Safety and compensation
It is largely thanks to unions that you can expect to work in a safe environment. Unions have pushed for better safety laws and brought to justice those employers that have been negligent. They have also fought for compensation for those people who are injured at work.

2. Advice
Free pension, legal and financial advice is available through your union, as well as a vast range of other services including good deals on insurance, credit cards and even holidays.

3. Job security
Members of unions are much less likely to lose their jobs than non-union members. That is because companies know the unions have a greater strength to appeal job losses and have the legal power to fight unfair dismissal. With 44 of the top 50 companies in the UK recognising unions, you have a much better job security if you’re with a union.

4. Better pay and holidays
Members of unions generally get paid more and are able to take longer holidays than non-members. The rights of non-members are often gradually eroded because people very often do not know what they are entitled to at work. With a union acting as a check and balance against infringements of worker’s rights, you can expect safer, better conditions at work and to be paid better for doing your job well. Collectively we can all get what we deserve.

5. Discrimination
Unions have long been at the forefront of fighting discrimination, whether this is on grounds of gender, race, sexuality or religion. Unions believe that we are all equal and free to work in a place where we are not judged on any of these unfair standards. They continue to be the standard bearer for employees’ rights in the face of discrimination.

So, as you can see, the unions still have a very big part of play in modern business and industry and if you are not a member you may be missing out on what you deserve at work.