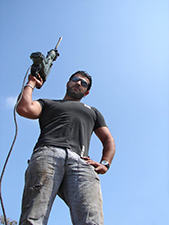 Over one in four young professionals are failing to follow health and safety procedures implemented by their workplace, finds a new study.

The research, which surveyed 2,000 workers employed by firms with a workforce of at least six staff, found 27% of staff members from 18 to 34 years old have endangered themselves by failing to abide by their company's health and safety procedures.

This is in direct contrast to them being more open than their older workmates to reading the guidelines handed out by their company. The study showed that 56% of those aged from 18 to 34 have at least read the rulebook, while only 30% of those aged from 45 to 64 having read it.

The study, which was undertaken by data capture application developer WorkMobile, further showed that many young employees do not possess the knowhow to handle hazardous situations, in spite of their insistence on having read company guidelines. Whether it is knowing which workwear to adopt or which PPE (personal protective equipment) to utilise in specific situations, such rules are put in place for a reason.

“To make sure young people are following the correct procedures, companies should consider introducing frequent meetings or updates to discuss health and safety in the workplace, so it remains front of mind for employees and they are aware of what to do if a hazardous situation was to occur.”

While fewer older workers have taken the time to look at their company's health and safety guide, only 8% have endangered themselves by failing to play by the rules.