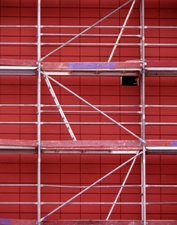 A builder from Tameside has been prosecuted by the Health and Safety Executive (HSE) and fined after carrying out unsafe work upon a roof, despite being issued with formal warnings previously.

Gerard Hurst, trading as Ashton Roofing and Building Construction, was taken to court by the HSE after work being undertaken was noticed by one of its inspectors in May this year.

Passing the building where the job was taking place, Trafford Magistrates’ Court was told that an inspector saw workers operating on a tower of scaffolding that had no edge protection. The HSE inspector explained to the court that there were no boards being used, safety rails installed, or flat roof protection.

When the inspector first noticed the failings, a Prohibition Notice was issued to stop all work on site immediately until the concerns were addressed. The court also heard how Hurst had been issued with similar warnings for work his firm was undertaking in the September of 2010.

Pleading guilty to the health and safety offences, Hurst was told to pay a fine and costs amounting to a total of £3,145.

Speaking once the verdict was delivered, the HSE inspector working on the case, Laura Moran, commented:

“When I drove past the building site in Stalybridge, I could see immediately that the scaffolding wasn’t safe.”

Ms Moran also stated that when driving past the site she immediately saw that the scaffolding was unsafe. This compelled her to investigate further regards other safety precautions, such as personal protective equipment, or PPE.