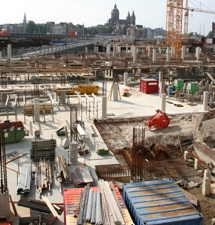 The boss of a worker who was killed when a concrete mixer crushed him to death has been found guilty of breaching health and safety regulations – despite not being found guilty of the manslaughter of the 33-year-old.

Simon Bromley was cleared of unlawfully killing worker Lee Balkwell but found guilty for health and safety breaches, after Mr Balkwell was not provided with adequate personal protective equipment (PPE).

Mr Balkwell was killed when he became stuck inside the drum and chassis of a concrete mixing vehicle. He was cleaning out hardened concrete from the vehicle at a farm in Essex in 2002.

Previously employed as an HGV driver, at the time of the incident he was working as a driver of the concrete mixer.

During the court hearing, Karim Khalil QC, bringing the prosecution against Mr Bromley, told the courts that he had a "lax attitude to safety".

The court also heard that, as well as not having the right PPE for the job, Mr Balkwell had never received adequate training in how the mixer should be used.

However, Essex Police said the death was a tragic accident rather than resting at the hands of Mr Bromley. An inquest in 2008 had ruled that the death was an unlawful killing.

Having heard both arguments, a jury decided that Mr Bromley was not responsible for manslaughter, but did convict on health and safety grounds.

Due to another court case concerning Mr Bromley at the time, the sentencing of the verdict was adjourned.