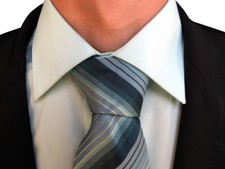 A group of young professionals in Birmingham have launched a scheme to help jobseekers to get back into employment. Professional workers are being asked to donate their unwanted work wear so that unemployed people can create a good impression at interviews.

Suited for Success was launched by a group of people who wanted to tackle some of the issues in the city, and youth unemployment is a huge issue. The group has partnered with Birmingham Central Foodbank and its Urban Boutique. Work clothing which is 'gently worn' is collected through the foodbank and then distributed to those who need it, providing a smart outfit for job interviews.

The collaboration believes that if a person is dressed smartly, their confidence will increase and they are more likely to have a successful job interview. Among those who are behind the scheme are associates from a law firm and a bank employee. The foodbank already had a job club taking place, so ‘Suited for Success’ was a natural next step. Reignite offers a ten week course which helps people get back into employment.

The organisation held a trial run of the project initially, but the success convinced them to officially launch the scheme. Although the scheme is relatively new, the co-ordinators are already looking at branching out into other areas of Birmingham.

Suitable clothing for work can often be expensive. In some cases PPE (personal protective equipment) has to be worn to protect a worker from harm while at work. The smart clothing which is being collected could make it easier for a jobseeker to secure a position with a company, by boosting their confidence for the interview.