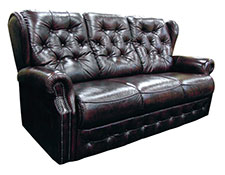 A well-known national furniture company has been fined following a breach of health and safety regulations.

A worker at DFS Trading Ltd. was severely injured in July 2015 when he was unloading furniture. Derby Magistrates' Court heard that wooden furniture frames were being unloaded by the worker, when one of the furniture arms fell from a load, which was unstable. The impact of the wooden arm striking the worker knocked him unconscious, and caused severe injuries to his head and neck.

The Health and Safety Executive (HSE) conducted an investigation following the incident, and discovered that the firm had not supervised the movement of heavy loads from site to site. The company had also failed to identify the risks involved. As the work had been unsupervised, a number of near misses caused by unstable loads had not been recognised. The company has been fined £1m and ordered to pay the costs of £15,099.

According to Lyn Spooner, the HSE inspector, the failings identified during the investigation were not expected in a company of this size. Although DFS Trading Ltd. was in a position to deliver a high standard of health and safety at its sites, it had failed to do so, placing a worker in danger.

The safety of workers is assured with the use of risk assessments, training in various health and safety aspects, and the application of PPE where appropriate, especially in a large organisation.