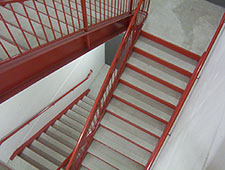 A Glasgow care home has been fined following the death of one of its residents, who went through a door which had been left unlocked, and fell down the stairs.

Mary Thom, aged 66, was a resident at Oakbridge Care Home in Glasgow, and had difficulty walking without the assistance of a walking frame. The vulnerable resident fell around one metre on 9th February 2013, later dying in July that same year of her injuries.

According to the Health and Safety Executive, the care home had been advised that all doors which led to stairwells needed to have a keypad or a similar device to prevent residents accessing them. However, the care home had fitted universal locks on all the doors, except one. When Oakbridge Care Ltd admitted breaching the health and safety regulations, Sheriff Paul Crozier fined the home £120,000.

The Sheriff stated that he didn't understand why the facility didn't heed the advice which they were given by HSE, adding that it was his view that the firm had not regarded the needs of Mrs Thom. A care plan had been produced for Mrs Thom, who had been a resident at the home since 2011, which included hourly checks.

In 2011, HSE advised that keypads or similar were required on the doors, and in 2012, a risk assessment was conducted at the place where the fall occurred, although a universal lock was fitted. It had been left unlocked on the day of the incident.

HSE offers advice to all companies and organisations which may include preventative measures like PPE, or similar.