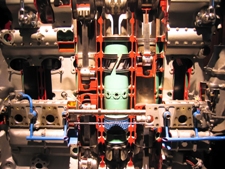 Two workers at a soft furnishings manufacturer were left with injuries to their hands, following incidents with unguarded machinery.

The first incident occurred in January 2015, resulting in a worker losing two fingers, while the second accident in May this year resulted in an employee's hand being damaged.

The Health and Safety Executive (HSE) prosecuted the owner of Carousel, Paul Boomer, for two breaches of Section 2 of the Health and Safety at Work Act 1974, and breaching Section 7 of Supply of Machinery (Safety) Regulations 2008. The fine was set at £14,000 and Boomer was ordered to pay £2,000 costs.

During the first incident, a worker was attempting to clear a blockage from a Modan Blow Filling machine. He put his hand into the motor area, which then came into contact with a rotary blade, severing two fingers. During the second incident, an employee was using a Mattress Roll Packing machine when his hand was trapped between two rollers. In each incident, inadequate guarding was in place which made it easier for the accident to occur.

The health and safety inspector stated that making sure the equipment was CE marked, and that measures were taken to ensure the safety of machinery could prevent further incidents, were of paramount importance.