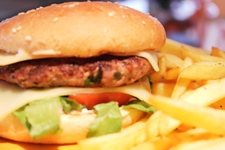 Workers in America have cited a lack of personal protective equipment (PPE) as a major reason why four out of five of them were burned in the workplace in the past year.

The findings come by way of a survey conducted by U.S. firm Hart Research Associates, for the National Council for Occupational Safety and Health (NCOSH).

It found that 79% of fast food employees had been burned in the last 12 months, with most saying it had happened more than once. Meanwhile, 87% had received some sort of injury at work in the last year. Of these, 78% said they had had multiple injuries.

The results of the survey also showed that many first aid kits were missing, hard to get to or not adequately stocked, with 36% of workers saying this.

A third of employees polled even claimed that they had been told by managers to use sauces like mustard and mayonnaise to treat burns.

The report comes as a number of cities in the U.S. saw protests outside McDonalds restaurants last week. The action comes after the OSHA, the U.S. equivalent of the Health & Safety Executive (HSE) here, received complaints in each city against the firm for hazardous conditions in the workplace.

McDonalds workers have alleged they have to work in conditions with slippery floors, and are instructed to complete cleaning and other tasks with burning oil and hot, greasy grills.

A statement from the firm said that it would investigate the allegations, but noted that it felt that many of the complaints had been filed as part of an organised strategy by activists taking issue with the brand.