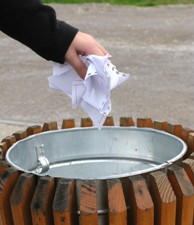 Members of staff from two Bedfordshire supermarkets have donned personal protective equipment (PPE) and cleared litter in a bid to clean up part of a town.

An eight-strong team of workers from the Tesco stores in Linslade and Leighton-Linslade joined together to pick up rubbish over two hours.

Putting on PPE such as high visibility clothing and safety gloves, the staff were taking part in the Linslade and Leighton-Linslade in Bloom 2015 scheme.

The competition, which sees local business and communities charged with clearing and brightening up their areas, is sponsored by the supermarket giant.

It was the first time volunteers had taken to the streets for this year's initiative, as the PPE loaned by Leighton-Linslade Town Council was put to good effect. Over the course of the bright and crisp morning, the team managed to clear an area which included part of a canal towpath, a carpark and part of the abutting road.

A large amount of litter was collected from the area including cans, bottles, cardboard, paper, plastic and clothing. As well as these standard items, some more surprising items were collected too.

With more than 20 sacks of rubbish and debris collected from the three sites, a battered video camera and doors were also found. The team also found a container of motor oil, still half-full, that had been thrown into the bushes.

With the area immediately looking better after the tidying session, other business wanting to clear up the areas surrounding their premises were urged to get into contact with the town council.