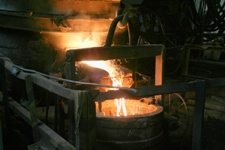 A new test to ensure that personal protective equipment (PPE) worn in the metal founding industry is now available. Ensuring that equipment is compliant to ISO9185 standards, the test provided by a German institute can be returned within three weeks.

The new test has been developed at the Hohenstein Institute, in the German town of Boennigheim. Ensuring that all materials are compliant and afford the best protection to anyone coming into contact with molten metals, the test is extremely robust.

Having been acclimatised over 24 hours in a controlled environment, the PPE material is stretched onto a frame over a PVC film. Representative of the human skin, the PVC film conforms to particular standards to ensure accuracy of testing.

Molten metal – measured, melted and controlled by set standards at the institute – is then introduced, where its impact on the PVC film is addressed. There is a sliding scale of damage assessed under the test.

The slightest damage is denoted by pale flecks appearing on the film, with other characteristic changes also alluding to damage, and perforations likely to be indicative of the worst damage. If no degradation in the film can be found, the amount of molten metal splashed onto the protective workwear material is increased by 50 grams, and the results analysed again.

When damage occurs, the test is then rerun, with the amount of metal being reduced by 10 grams on each test, until the damage resistance can be accurately determined.

The test is rerun to replicate. All recorded results produce a Molten Metal Splash Index, allowing health and safety officers to better understand the materials workers are using for their daily tasks.