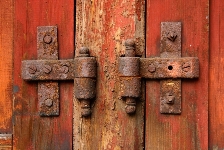 A Telford firm has been fined following the death of two members of sea-shanty group Fisherman's Friends at a Guildford theatre.

Judge Philippa Whipple fined Express Hi-Fold Doors Ltd £30,000 after finding the company guilty of breaches in health and safety regulations. The owner of the company, David Naylor, 57, was acquitted of two manslaughter by gross negligence charges following the incident, which happened in 2013.

Singer of the band Trevor Grills and band promoter Paul McMullen were both killed when a stage door weighing two tonnes fell onto them. The door had been supplied by Naylor's company. Grills, 54, had been singer with the Cornish band for 16 years, and had only recently finished recording a new album.

The door was being lifted above the two men when the drive chains, which linked the motor and gearbox to the drive shaft, had failed, resulting in the door falling to the ground. McMullen, 44, was crushed beneath the door from the waist down, dying at the scene. Grills died in hospital three days after the incident.

The judge said that he appreciated the company did not disregard the law on purpose, but stressed that health and safety standards were not adhered to.

The court was told that the company had suffered previous door failings in 2010, when Naylor admitted that there was a problem.

Health and safety regulations help protect workers and members of the public from injury or death, using PPE and other methods available.