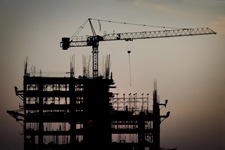 An illuminating new concept has appeared on the person protective equipment (PPE) front. With the potential to significantly enhance worker safety on any number of sites, the self-lighting clothing could be used in numerous environments.

Launched at the annual conference for the renewable energy sector, it is set to revolutionise working in the dark for all industries.

Standard PPE hi-vis clothing is made using fabrics which reflect light. Working to make staff more visible at night and in darkened areas, and acting as a warning to other workers and the public, they have improved safety conditions immeasurably.

Being reliant on an external light source though, there are limitations to the clothing's effectiveness. The new concept however, with the help of a battery powered electroluminescent core, illuminates even if there is no additional light source available.

It is the first update to the reflective tape in around 50 years, other than general improvements. With more night time working being demanded and round the clock working often required on major civil engineering products, the new self-lighting clothing could revolutionise work patterns.

It could also bring about a change in the culture of working as a whole, according to a spokesman for the product.

The product was launched at RenewableUK 2013, the 35th running of the traditional end of year conference and exhibition hosted by the trade body for the renewable energies.

Hosted across three days at the NEC in Birmingham, over 4,500 delegates attended this year's event, listening to and visiting nearly 450 exhibitors and speakers.