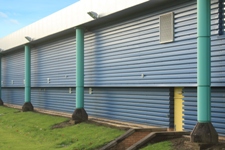 A sawmill in the Scottish Highland town of Nairn has been fined following a health and safety investigation into the death of one of its employees.

John Gordon and Son Ltd has been fined £80,000, reduced from £120,000 due to the company entering a plea of guilty, for breaches of the health and safety legislation. Peter Ord, who had worked at the sawmill for eight years, became trapped in machinery, causing fatal injuries. The family of Ord have stated that the fine is “a joke for the loss of a life”.

The incident occurred last year, on February 23 The system had been blocked at various points through the day and the machinery had already been turned off to reposition the wood. Sometime after 8:25am, nearby colleagues heard a shout and saw that Ord had become trapped in the waterfall mechanism, in a crouched position. After the emergency stop button had been activated, a first aid worker attended the scene, although it was too late to save him.

The Health and Safety Executive (HSE) had carried out an investigation, and believed that Ord had probably got through a gap between two guards, or maybe climbed over the conveyor table. Apparently, the guards had been defeated on previous occasions by other employees.

The company has taken steps to improve the guarding on the machinery, while a manager would be permanently on site. It is necessary for all companies to make sure that health and safety regulations are complied with, including the wearing of protective workwear when necessary.