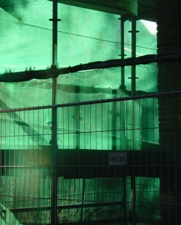 A scaffolder from Essex has been fined after pleading guilty to a charge brought by the Health and Safety Executive (HSE) over unsafe working.

Christopher Harker, along with one of his workers, was found to be risking the lives of the public and themselves during a job at a London property earlier this year.

Harker and his colleague were found to be climbing up and down the outside of scaffolding extending over four-storeys. Both seemed unaware of the risks of falling and the subsequent severe injuries this could cause.

The two workers were also seen to be leaning through openings in the scaffold tower, many of them 10 metres above the ground, passing materials between each other.

No personal protective equipment (PPE), such as harnesses, was being used, whilst there was no evidence of edge protection being in place.

The conduct of Harker and his colleague was witnessed by a HSE inspector, while it continued despite the inspector making his presence and position known. The inspector had also warned the two workers of the dangers and had to call the police to attend the site after Harker became hostile.

Having heard the evidence from the HSE investigation, Westminster Magistrates’ Court issued Harker a fine of £800 and ordered him to pay costs of £577.