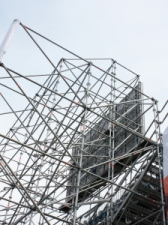 A scaffold company has pleaded guilty to safety breaches after a worker had to have his lower leg removed as a result of injuries suffered in a fall.

The court heard that Andrew Gore fell four metres after safety equipment was not adequately used. The court was also told that the worker had not received appropriate training, with no recognised and certificated courses completed by Mr Gore.

The incident happened in June last year, when Mr Gore was passing scaffold, which was being dismantled, from one colleague to another. With no guardrails or any personal protective equipment (PPE) being worn, Mr Gore fell after leaning on a loosened brace.

The fall resulted in serious injuries and numerous operations, including the amputation. However, the accident was only reported to the Health and Safety Executive (HSE) after Mr Gore filed a compensation claim; nearly six months after the incident.

Pleading guilty to breaching working at height regulations and of not reporting an injury, Mills Scaffold Company Ltd was fined £15,000 and handed down costs of £1,118.

Speaking after the hearing, the HSE Inspector on the case, Hayley Healey, said:

“Mr Gore has suffered a great deal of pain and life changing injuries… This was a totally needless incident which could have been avoided if Mills Scaffold Company had ensured a safe system of work had been in place.”

Ms Healey went on to say that, as well as following simple methods and correctly supervising the work, there is plenty of help and advice available for firms to access.