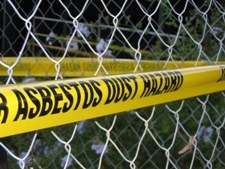 An Argos store on Royal Parade in Plymouth has been allowed to open its doors again after asbestos was discovered in the vacant property next door.

Health and Safety Executive (HSE) inspectors issued a Prohibition notice, which meant that the Devon store had to close immediately, and its doors remained closed for a week as a precaution. The building next door to Argos was previously Derrys department store, a 1950s shopping mall, which is being converted into a hotel, retail units and student accommodation.

A spokesperson for HSE confirmed that the Argos store had been closed when asbestos had been discovered, saying:

“This was following the discovery of asbestos. Before doing so we checked with the local authority and they supported our intended enforcement. We informed the local authority too because at the base of the building there is an Argos store and two other smaller shops. This effectively stopped Argos from trading.”

The former Derrys store is now a £50m development project in partnership with Thames Bank Property, which has involved with the development for over three years. Full planning permission was granted last August, so that the development can begin. The building will house a 110-bed hotel and student accommodation catering for 500.

Phil Hopwood, the project manager, spoke in an interview with the Plymouth Herald, saying that the Argos store had only been closed as a precautionary measure so that further investigation could be carried out.

Asbestos has to be removed by specialists, who use PPE and specialist workwear to prevent contamination.