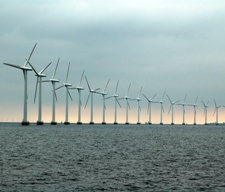 The Institution of Occupational Safety and Health (IOSH) has made a visit to the new RWE Gwynt Y Môr site, and was reportedly pleased with the findings.

With lessons learned from the construction of the Olympic venues in London for 2012, the site has a stellar health and safety record; this is all the more impressive, according to the IOSH, with the high risk of incidents typically affecting such offshore projects.

Accepting an invitation to visit the soon-to-go-live site, the IOSH team – suitably clad in PPE (personal protective equipment) – liked what they saw and heard.

The team, headed up by Simon Hatson, a member of IOSH’s offshore group committee, and the chair of the North Wales IOSH branch, Lawrence Bamber, landed at the turbine farm on Tuesday, 25th November.

“This site has a fantastic safety record, which is great to hear. This should be used as an example for other projects in the future.”

With construction beginning in January 2012, workers involved in the project were provided with training and information to stay safe on site long before this. As well as visiting the sites being built in 2011for the London Olympics, factories contributing to the farm's construction were also visited.

The Health and Safety Executive was also engaged with early, underlining the importance of taking the advice offered by the body responsible for safety in the workplace.