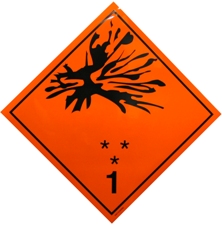 Laws that will control working with explosive materials and compressed acetylene gas will come into effect next month.

The two sets, which will be enforced from October 1st, also replace a number of other legislative measures, as well as the current guidance for the explosives industry and manufacturers, suppliers, and storage facility providers for compressed acetylene gas.

It is hoped the new regulations will help in reducing the red tape that is presently in place and ensure worker safety through adequate processes and workwear.

The consolidation of the one regulation into two was recommended by Professor Ragnar Löfstedt, following his assessment of health and safety.

In his review, the director of the King's Centre for Risk Management at King's College London found that the overly complex structure on health and safety regulation was burdensome for industry players.

Löfstedt also found that businesses all too often receive inadequate guidance on health and safety from poorly qualified consultants in the industry, and that the growing 'compensation culture' trend is a disruption.

The HSE and local authorities also came in for criticism, with Prof. Löfstedt explaining how he believed that the number of inspections taking place at well-run and well-performing, low-risk workplaces was too high.