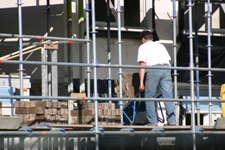 A health and safety investigation has been launched following two incidents at a building site in Spinningfields.

The incidents took place at a building site, located next to the Manchester Civil Justice Centre. McLaren Construction has defended both incidents, stating that measures have been put in place to ensure that they do not recur.

One of the incidents took place in October this year, when a load was being lifted by a crane. A gust of wind caught the load and swung it towards a column, which caused two pieces of wood to become dislodged and fall to the ground. However, McLaren state that the wood fell into an exclusion area which had been set up around the construction site.

A more recent incident involved a heavy metal beam falling from the same site, narrowly avoiding a man and his companions.

“Following this a full investigation was instigated. Representations were also made to the HSE, who requested information in regards to the incident. The HSE concluded that the case was closed and that they would be taking no further action at this time.”

The new building will house restaurants, cafés, meeting places, leisure facilities and a bike park. McLaren have stated that they take health and safety very seriously, and the member of staff responsible for the falling metal beam has been disciplined. Additional safety procedures have been put in place so that the incidents can't happen again. PPE and suitable workwear may also be required to ensure the safety of its workers.