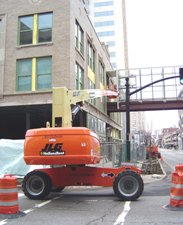 A man working at a tourist attraction near Tenby in Wales was fined £2,000 following an accident that injured both him and another worker.

The fine was levied as the contractor was found to be guilty of a health and safety breach.

Richard Lynch was working alongside another worker to build a geodesic dome at a wildlife park near Tenby. A telehandler was being used with a basket, which fell off the forks when it was being lowered. The other worker suffered serious injuries to his ankle and foot, while Lynch was left unconscious at the scene.

Lynch pleaded guilty at the magistrate's court in Haverfordwest to a breach of Section 3 (2) of the Health and Safety at Work Act 1974. Costs of £1,002.80 are to be paid by the contractor in addition to the fine.

The Health and Safety Executive (HSE) investigated the accident and prosecuted Lynch on the grounds that he was negligent, as he had received no training for health and safety management on a construction site. According to Lynch, he had driven a telehandler for many years without incident, stating that it was a freak accident.

“If Richard Lynch had planned and managed the task properly and identified the risks, he would have been able to ensure suitable equipment was used, and safe procedures implemented.”

There are strict procedures in place in the workplace to protect workers from serious injury, which includes using the correct machines for the job and personal protective equipment (PPE).