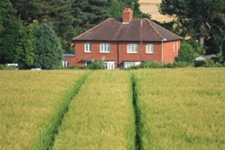 A fruit farm in Kent has recently been fined following an investigation by the Health and Safety Executive (HSE).

An incident had been reported under the Reporting of Injuries, Diseases and Dangerous Occurrences Regulations (RIDDOR), leading to HSE visiting the premises and launching a full investigation.

According to the report by HSE, a door was repaired by a contractor who was self-employed, by using an overturned apple box raised on a forklift truck. This incident took place in December 2014 on the premises of Paynes Stores Ltd. HSE also reported to Sevenoaks Magistrates Court that roof work had been carried out at the premises without adequate health and safety precautions being put in place. This would include specific training for the task and controls put in place, which may include the wearing of PPE.

The company, of Swanton Farm in Kent, was ordered to pay costs of £9,173 and fined £18,600 after pleading guilty to the charges. The company breached Section 2(1) of the Health and Safety at Work etc. Act 1974, Section 3(1) of the same regulations and Regulation 9(3) of the Working at Height regulations.

Joanne Williams, an inspector for HSE, stated that thorough planning and preparation for those working at height was crucial to prevent accidents occurring. This included precautions being identified and put in place to ensure the safety of workers. Williams added that she hoped the prosecution acted as a warning to others, and that HSE will take action against those found to be in breach of the relevant regulations.