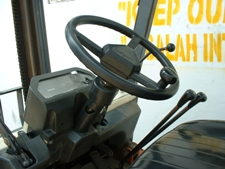 A Derbyshire company was recently hit with a £450K fine after a worker was killed when driving a forklift truck.

Ben Pallier-Singleton, 19, passed away after the forklift turned over at Vinyl Compound Ltd’s High Peak site on February 10, 2015.

The Health and Safety Executive (HSE) investigated the firm after it found that Pallier-Singleton had been insufficiently trained. The HSE further found that he was not even wearing his seatbelt, meaning the issue went beyond the incorrect application of workwear.

The firm was also told to pay over £71,000 in expenses at Minshull Street Crown Court in Manchester after it pleaded guilty to health and safety breaches.

Insufficient speeding measures were implemented and workers were not informed about the speed limit. The HSE also said that the firm had omitted to install sufficient edge protection or lighting, which could have prevented the accident.

The mother of the victim, Kathryn, said that Paul was a “shining light” who had "brought everyone together".

"I am heartbroken and angry that Ben could go to work and be killed because his employer, Vinyl Compound, took so little care of him, failed to train him or make sure the workplace was safe.

"It is utterly shocking that this can happen even now.”

She went on to say that the company directors are able to continue living their lives, in contrast to Ben's family, who will be forced to grieve for the rest of theirs. She said that the fine they were given does not mean anything compared to the situation the family is facing.