Fine issued as member of public struck by vehicle 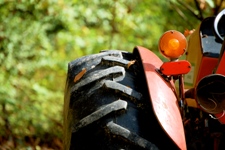 Nottinghamshire County Council has pleaded guilty to two breaches of the health and safety regulations in relation to a June 2015 incident involving a member of the public.

Nottingham Crown Court was told that employees of the Council had been working in Rufford Abbey's County Park when the incident occurred. Branches were being collected so that they could be burned, and were being transported using a grab attachment on a tractor. During this time, a disabled man in his 70s was taking part in a guided walk in County Park. The driver of the tractor was unable to see the man and collision occurred, leading to serious injuries and bruising to the man’s head, arms and legs.

The Health and Safety Executive carried out an investigation, and found that a safe system of work had not been implemented by the Council, which had failed to separate movements of transport from members of the public. The workers had not been trained to the required level in order to operate the grab attachment, while the tractor was not a suitable vehicle to move the branches for long distances.

The council pleaded guilty to two breaches of the Health and Safety at Work Act 1974, received a fine of £1m, and was ordered to pay £10,269.85. The case highlights the responsibility which an employer has to members of the public, in addition to its own workforce. PPE and workwear may be required for workers, while alternative measures may be required for members of the public.