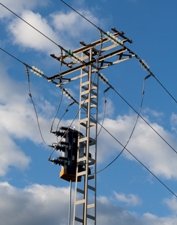 A director of a dairy farm in Shropshire has been fined after his failure to provide adequate protection for working at height.

The director of Shutt and Mansell Ltd was fined £18,000 with costs of £1,495 after pleading guilty to three breaches of regulations. It followed an incident at the farm that left himself and a worker unconscious and at risk of suffering a fatal fall.

The firm was also fined £6,000 with £800 in costs, pleading guilty over a separate but related charge. The prosecution related to an incident at the farm in September 2013.

Shrewsbury Magistrates’ Court heard how both workers were left unconscious after receiving an 11,000 volt shock from overhead cables.

Both suffered electrical burns in the incident and received medical treatment at hospital. The accident occurred as work commenced on two molasses tanks.

The two men had been lifted into a telehandler loader bucket, not designed for transporting individuals, by a telescopic loader. After receiving the shock, both workers slumped into the bucket.

However, it was also revealed that there were no fall protection measures in place at all. The Health and Safety Executive (HSE) investigator working on the case, Dr Marie-Louise Riley-Roberts, commented:

“There was a very real risk of persons falling from height. It’s only down to luck that [the workers] fell into the bucket and not out of it, otherwise we could be dealing with a tragic, double-fatal incident.”

HSE guidelines state that for working at height, adequate fall protection should be in place. As well as rails, personal protective equipment (PPE) such as harnesses could be considered.