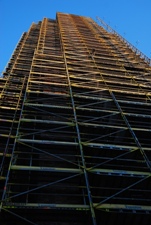 An engineering company based in Swansea has been prosecuted and fined after a worker fell from scaffolding, sustaining serious injuries.

Swansea Magistrates’ Court was told that Motherwell Bridge Ltd, one of the UK's leading engineering companies, had failed in its health and safety responsibilities.

The worker suffered the fall as he was trying to weld seams on a gasholder at a Tata Steelworks plant in Port Talbot in Wales.

He was working from a scaffold erected around the gasholder, along with other individuals. As he made his way around the structure, he fell through a gap in the platform floor.

The gap had been left after another welder removed planks to assist with his own work. The court heard how this was an accepted way of working at Motherwell Bridge.

The stricken worker fell from a height in excess of two metres, landing on his back onto a concrete plinth at the base of the gasholder. Two planks from the plaftorm also fell, striking the worker.

The man suffered two fractured ribs, bruising to his lungs and a severely strained torso. He still suffers with ongoing problems caused by the fall, and has been unable to return to work.

The court heard how the resulting Health and Safety Executive (HSE) investigation found the firm had no sufficient assessment plans implemented for the work, and did not have supervision in place.

The HSE also found that 20-year-old procedures were being used instead of current guidance.

Regulations around working at height have changed considerably in that time, updating advice on working procedures, workwear and risk awareness.