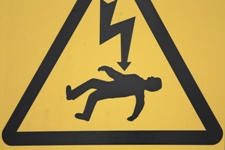 The sentencing of two Norfolk firms has been adjourned so that it can take place at Norwich Crown Court, after Norwich Magistrates Court deemed that its maximum fine of £20,000 was inadequate.

An employee of site owners L F Papworth, based in North Walsham, and TW Page and Son, based in Norwich, suffered a major electric shock in April 2014, while performing a role in Felmingham.

Jon Howes was working on a drilling rig when it came into contact with a live power line. The electric shock knocked him to the ground, as 33,000 volts surged through his body. As he landed close to the live power line, two officers risked their own safety by dragging him away from the scene, saving his life.

The two companies admitted at Norwich Magistrates Court that they had breached health and safety regulations. The magistrates decided that the maximum sentence of £20,000 that could be enforced was insufficient. As a result, the case has been adjourned to Norwich Crown Court for further sentencing.

Marta Tomlinson and Matthew Gowen both pleaded guilty of failing to perform their duty, thereby exposing Howes to danger that threatened his life and left him with life-changing injuries. The sentencing at Crown Court will take place on 20th July, 2016.

All employers must abide by the health and safety legislation, which deems that they must ensure that employees are exposed to minimal risk. This involves risk assessments, the use of PPE and specialist workwear.