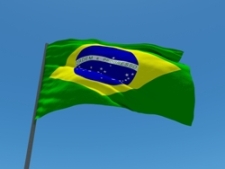 Another worker has been killed at the construction site of a stadium being built for the World Cup in Brazil. It brings the total number of fatalities to eight at venues hosting the football tournament this summer.

The worker, Fabio Hamilton da Cruz, is the seventh to die from an on-site accident.

The firm went on to say that Mr da Cruz plummeted eight metres while installing seats at the Itaquerao Stadium. However, firefighters who attended the scene said he fell 15 metres at the Sao Paulo venue, which is hosting the opening game of the tournament.

Saying how regretful the death was, a statement from Aldo Rebelo the Brazilian sports minister, went on to say that officials were awaiting the results of the investigation before commenting further.

Responding on Twitter to the news, the secretary general of FIFA Jerome Valcke said:

"[I am] deeply saddened by the tragic loss of a worker."

The World Cup organising committee and FIFA both said they also were awaiting results of the investigation before issuing any statement.

The press office at the hospital said he died of head injuries, suffered in the incident, just before being taken down for surgery.