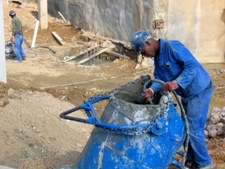 A 10-year-old boy in the Netherlands was spotted pouring concrete while on a visit to a construction site, with the health and safety board in the country fining the builder for the lapse.

The boy, who was the son of contractor working at the site, was clearly helping with the work in the town of Eindhoven, rather than just taking an interest in what was being done.

It is understood that the boy's father had taken the child out of school for the day and brought him along to work with him. The boy was seen helping his father's team to pour the concrete floor. It is also understood that he was responsible for moving the mortar hose of the concrete pouring equipment.

A SZW Inspectorate (the Dutch equivalent of the Health and Safety Executive) spokesperson said that despite the boy wearing personal protective equipment (PPE), including a hard hat and safety boots, he should not have been there.

“The father did not bring his son along to lead him around, which he is allowed to do.”

He went on to add that while children can be taken on visits to the place of their parents work in Holland, it was a not intended for them to help with the job. He also mentioned that with the ease with which accidents can happen on site, construction areas are not safe for kids, even if they are wearing appropriate PPE.