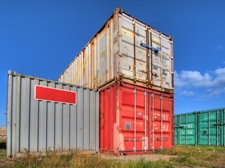 An Essex firm has been found guilty of breaching health and safety at work regulations after a worker suffered life-changing injuries from a loose container.

Andrew Gotts was helping unload a container at Felixstowe Port when it became loose and crushed his leg. The 26-year-old suffered multiple fractures as a result of the accident.

Despite major reconstruction surgery, it is still not clear when Gotts will return to work.

Bringing the prosecution, the Health and Safety Executive (HSE) told Chelmsford Crown Court that the company had not implemented a procedure for dealing with jammed containers. As the operation had no one in charge, Gotts was not asked to vacate the area.

The court also heard that Harwich Dock Company put the safety of its workers at risk by not using appropriate personal protective equipment (PPE) to avoid falls. Despite the firm having its own harness policy, on-site supervisors were not enforcing this.

Talking after the verdict was handed down, the HSE Inspector on the case, Toni Drury, commented:

“This incident was entirely preventable. Mr Gotts was injured by a jammed container when it suddenly freed and he sustained horrific and life-changing injuries.

“The risk of containers jamming is well-known in the port industry. There should have been a clear procedure.”

Drury went on to say that had the process been properly managed, the exposure to risk would have reduced significantly.