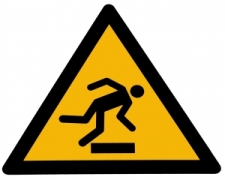 An investigation into an accident which took place at a glass manufacturing company has resulted in the owner of a ventilation system company being fined.

A contractor employed by ‘Shield Ventilation Services’ fell from an industrial box oven at ‘Peterlee Glass Company Ltd’, resulting in severe injuries including fractures to the neck, collarbone, skull and sternum and the loss of his sight in the right eye.

Three contractors had been sent by the ventilation enterprise to work on the oven at the glass company. One of the contractors stood on the oven roof, but stumbled and fell to the ground. Paramedics attending had to induce a coma, as the injuries were so severe. The contractor hasn't been able to return to work.

According to the Health and Safety Executive (HSE), the contractor had failed to plan the dismantling work in a correct manner, while the glass company had failed to control the contractors while the task was being performed. At Peterlee Magistrates' Court, Peterlee Glass Company pleaded guilty to breaching Section 3(1) of the Health and Safety at Work Act (1974) and was fined £1,500 as well as having to pay costs of £1,131.

According to the Act, employers have a duty of care to their employees, ensuring safe practices are used during their activities and the use of PPE (personal protective equipment).