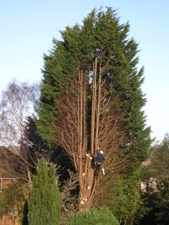 Two parties have been fined following a 2013 accident that has left a worker to spend the rest of his life in a wheelchair.

The 59-year-old from Gerrard's Cross in Buckinghamshire was assisting Paolo Mule, trading as P&X Complete Cleaning Services, to clear school grounds in preparation for building work due to take place. Mule had been hired by operator Alpha Schools Limited to conduct the necessary task.

Following an investigation by the Health and Safety Executive (HSE), Aylesbury Crown Court heard that the worker was standing on an unsecured ladder while resting against a tree. A large branch, which had been partially cut, swung down and hit the ladder, causing it to fall. The contractor was thrown off the ladder, landing on the ground below on his back. This resulted in permanent injury to his spine. The man is now confined to a wheelchair for the remainder of his life.

The investigation revealed that the school operator had failed to hire contractors that were sufficiently competent to carry out the arboriculture work. The contractor, Mule, had also not carried out a risk assessment prior to the work taking place.

Additionally, the ladder had remained unsecured and ropes had not been used. A safe system should also have been implemented and the area secured, so that members of the public would not be nearby. Both parties were fined and Mule received a suspended prison sentence.

The Health and Safety at Work Act provides clear guidance for keeping workers safe, including the proper use of PPE. Failure to comply can result in fines and even prison time.