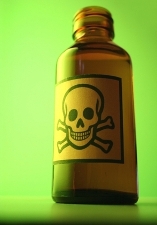 The owner of a fish and chip shop in Leamington has recently been fined following an incident where a customer ingested a condiment given to her by a member of staff and suffered internal burns.

Ali Varvil, the director of Spa Catering Ltd, was fined £510 after pleading guilty to a breach of public health and safety. Varvil was also ordered to pay costs of £3,440.

The incident occurred on 19th July 2014 during the early hours of the morning. An employee at the fish and chip shop gave ‘Malteen Condiment Essence’ to a customer who ingested it after being advised that the liquid was “strong” vinegar. The label on the contained states that the liquid is “pure acetic acid” and, until it has been diluted, is corrosive.

Just after the liquid had been consumed, the customer began to feel ill and started vomiting. An ambulance was called and the customer was taken to hospital, where she remained for three days. She received burns to her oesophagus and mouth, for which she was treated.

Officers from Warwick District Council investigated the incident, discovering that the staff had not received sufficient training for the handling and diluting of the substance. The employee didn't realise that the liquid was hazardous and could cause serious injury.

The council works with businesses in the region to ensure that they protect members of the public and their staff from injury. Working with chemicals and hazardous substances often requires the use of PPE.
View All Personal Protection Equipment Industry News