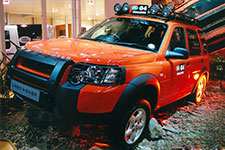 Jaguar Land Rover has been found guilty of failing to protect workers from serious injury, resulting in a fine.

The company was fined following a car accident on the premises, resulting in an employee having their leg amputated. Birmingham Crown Court was given the details of the incident, which had occurred in Solihull, West Midlands at the Lode Lane plant.

On February 8, 2015, a worker was driving a Range Rover Sport onto the production line. This was a regular procedure and took place 48 times each hour. During this process, the Range Rover went out of control, and bumped into a previously delivered vehicle, causing a shunt involving four vehicles.

Simultaneously, another worker was walking across the production line, and was trapped as the second and third cars collided. The injuries incurred by the worker resulted in his leg being amputated from above the right knee. Minor injuries were also incurred by two other employees at the company.

A Health and Safety Executive (HSE) investigation found that the company had failed to comply with health and safety regulations. The driver of the vehicles had not been adequately trained in procedures, while the moving vehicles had not been separated from the workers on the processing line. Jaguar Land Rover was fined £900,000 and ordered to pay costs of £49,800.

John Glynn, a HSE inspector, said that the incident had been avoidable, and it could easily have been fatal. Although the company recognised the risks, it had failed in its protection of employees, which included the use of PPE, training procedures and risk assessment.