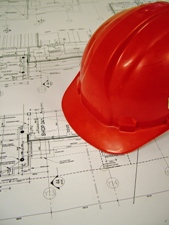 Campaigners calling for better safety on construction sites in the UK have staged a protest in East London, following the death of a worker there.

The Construction Safety Campaign (CSC) staged the demonstration at the Docklands Light Railway (DLR) site as part of a vigil for Kevin Campbell.

The 40-year-old worker died after being hit by a falling object on 2nd March. Mr Campbell was pronounced dead at the scene after attempts to resuscitate him failed. A minute's silence was held for Mr Campbell close to the site of the Queen Elizabeth Olympic Park.

The chairman for the CSC campaign, Peter Farrell, said the success of the 2012 London Games needs to be an example for the future of construction site safety. Mr Farrell said that having unions on each site was a key part to there being no deaths throughout the project.

With improvements in the approach to worker safety and personal protective equipment (PPE), Health and Safety Executive figures show a falling trend in construction worker deaths. However, there are still four times as many construction workers killed on-site than in the average UK workplace.

A spokesman for the HSE admitted that while the body runs targeted campaigns, and firms found to be deliberately risking worker safety are prosecuted, more does need to be done. The HSE spokesman explained:

“Too many people die every year on Britain’s construction sites as a result of entirely avoidable incidents.”

The DLR and Crossrail construction site where Mr Campbell died is presently under HSE control with an investigation process ongoing.