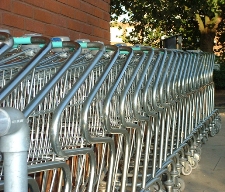 Aldi supermarket chain and Wilkinson Maintenance contractor company have both been fined following an incident where an unsecured smoking canopy injured a worker.

The shelter was blown by a gust of wind while employee Michael Simpson was taking a smoking break. The incident occurred at the Faverdale distribution location, and resulted in Simpson being struck by the unsecured shelter and being pinned momentarily. According to a report in the Northern Echo, his back received injury to the soft tissue and both arms were injured. Simpson told the reporter that he still suffers from nightmares, over a year after the incident took place.

The prosecution lawyer representing Darlington Borough Council, Ros Scott Bell, said that the incident could have resulted in a much worse injury and even death. The court heard that Wilkinson Maintenance had moved the shelter, which is made of Perspex and metal, to a new spot while the firm was installing an emergency exit. Aldi presumed that Wilkinson Maintenance would secure the shelter, while the contractor had believed that Aldi would have responsibility.

Despite the fact that both companies had previously held good records for health and safety, each company had a duty of care. This may include the securing of objects likely to cause injury, or even the use of PPE where necessary.