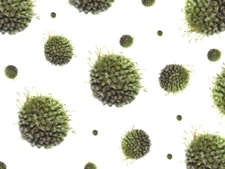 The artist realised that Ebola patients who were being cared for by healthcare workers rarely saw a human face, as the medics were all in gear that left them completely covered from head to toe. In answer to the issue, she proposed that protective suits (PPE) should bear photos of the healthcare workers.

As Heffernan realised that the current setup was making the situation much worse for patients, she set about finding a solution by using grant money of $5,000 (£3,304).

Heffernan, an art professor teaching at Occidental College in Los Angeles, spent her money and time developing a kit to be used in hospitals in West Africa to take photos that would be attached to the front of the protective suits.

The PPE Portrait Project was described by Heffernan as:

“[…] part of that history of making art that's about action, about changing society.”

After her attempts to reach 75 contacts with no success, she finally had a response from the Ebola case manager in Liberia, Moses Massaquoi, who believed in the potential of the project.

After many technical problems, Heffernan finally managed to apply photos to the front of the Ebola suits in Liberia. According to one worker at a Liberian treatment centre, the project has made a difference to patients and staff, who now feel like they are working with people instead of ‘white zombies’.

PPE is essential for the safety of workers in many occupations, although it isn’t usually fitted with photographs.