Posted by Chris Broughton
on 9 June 2014 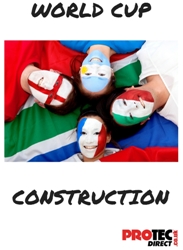 Anticipation for the 2014 World Cup in Brazil is close to reaching fever pitch ahead of the tournament kick off on June 12.

However, this is largely down to the fact that some stadiums and cities are still not ready to host games, including the venue for Thursday’s opening ceremony and fixture between Brazil and Croatia in Group A.

Sao Paulo was given this World Cup opener way back in October 2011, but the new Corinthians Arena is still yet to hold a full-capacity event, when FIFA usually prefers to hold at least three test events per venue.

The stadium held a hastily scheduled second and final test fixture last Sunday, but construction work was still going on and seating for 20,000 fans was closed after failing to receive safety clearance from firefighters.

Accidents
The substantial delays and safety problems at Corinthians Arena have been caused by numerous strikes and three tragic deaths. Two men were killed in November when a crane collapsed while carrying a huge roofing structure, before officials halted construction again in March when a worker fell to his death while installing temporary seating.

A total of eight people have now died in accidents during the building of Brazil's 12 World Cup arenas, compared to two deaths during the preparations for the 2010 World Cup in South Africa..

Last month, a 32-year-old construction worker was electrocuted while installing communications equipment at the new Arena Pantanal in Cuiaba, which also missed the original December 31 deadline for all host stadiums to be complete.

In February, a Portuguese man was killed by a crane part while working at the Arena Amazonia in Manaus. He was the third person to die in an accident at the north Brazilian stadium, where England will start their World Cup campaign against Italy on June 14.

These deaths have been blamed on local World Cup organisers cutting corners and ignoring health and safety procedures to get venues finished quicker, with stadiums in Curitiba, Natal and Porto Alegre still incomplete to varying degrees.

Infrastructure Concerns
Despite investing 25.8 billion reais (£6.8 billion) in cup-related infrastructure, organisers have also had to put off most of the upgrades originally promised for the tournament, from airports and buses to road works and car parks.

This has raised concerns over whether Brazil can safely cope with transport demands as an estimated 600,000 foreign fans and 3.1 million Brazilians are expected to travel across the country throughout the next month.

Tests on a long-awaited metro line in Salvador have also been suspended after a worker died in an accident and service is now set to begin June 11, on the eve of the World Cup opener.

The public’s frustration with these problems and the growing cost of hosting the World Cup have caused widespread protests in Brazil over the last couple of years, which looks set to continue long after the World Cup final on July 13.