The Paintball Injuries You Want To Avoid

Posted by Chris Broughton
on 24 January 2014 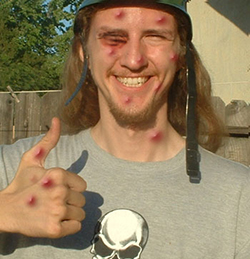 Paintballing was first introduced in 1981 and is now played in over 40 countries as a war game, said by many to be a more sophisticated and high energy version of capture the flag. Hugely popular as a team building exercise or male bonding day out, it’s a sport with a difference, but unfortunately it has been known to expose those who are playing the game to unreasonable risk. The good news is that the associated injuries are easily avoidable, simply by sticking to the rules and using the correct personal protective equipment (PPE).

If you want to come out victorious from a game of paintball, here are the injuries you and your team want to avoid.