Posted by Chris Broughton
on 4 April 2014 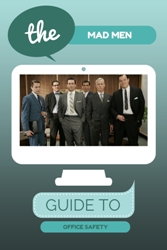 Despite frequent protestations that TV is getting worse and that there is never anything on, we are actually living in a golden age of television drama. It’s a time when the medium is pushing boundaries and becoming much more cinematic in scope. Landmark series such as The Wire, The Sopranos and Game of Thrones are redefining what is possible in terms of TV. It only seems like there is nothing on because there are now so many channels that the quality is diluted.

One series from recent years that has had a huge cultural impact is Mad Men. Set in a 1960s advertising agency on Madison Avenue in New York, the show follows the morally ambiguous exploits of Don Draper and his colleagues in a fast-paced, stylish and culturally shifting office environment.

Apart from the slick suits, stylish secretaries and intrigue, the show also demonstrates how far we have come in terms of office culture. Certain things that are routine and taken for granted on the show would be sensational in today’s workplaces. Swigging gargantuan glasses of single malt whisky, while puffing on countless cigarettes in your office is not likely to end well these days.

Having learnt the hard way from Mad Men, here’s how to tackle office safety.

Only trained individuals should operate equipment
Several other of the shows adult themes would also be out of place in today’s office environment. There’s also one particularly extreme incident in the office with a lawnmower that definitely wouldn’t be allowed in today’s workplaces. But it serves as a great example of why steel toe-capped boots and other PPE equipment is required by law when working in certain professions. If you’ve seen the show you’ll know exactly what we mean.

Stay away from addictive substances
Mad Men has been widely acclaimed for its realistic portrayal of the macho environment of the time it is set. Thankfully, times have changed. The show’s creator Matthew Weiner has even admitted that despite all the smoking in the show, the actors are actually only puffing on relatively harmless herbal cigarettes due to concerns about their health. Never smoke on the job or consume even a fraction of the amount of alcohol as these advertising execs.

Pay attention to legislation
Since the show’s era, the 1960s, here in the UK there have been two major legal developments to change workplaces for the better. The 1974 Health and Safety in the Workplace Act and 1992 Personal Protective Equipment at Work Regulations Act have helped to make the offices, warehouses and workplaces of today much safer for everyone.

In the cut and thrust world of 1960s advertising, it’s unlikely much attention would have been paid to safety of any kind in the office. If you got hurt, it was probably your own fault. That’s not quite the way we see things today.

And while it is fun to watch Mad Men, to envy the clothes and the hairstyles, we’re definitely better off living and working in today’s conditions. And if you don’t believe us, maybe you should check out the lawnmower scene (WARNING: it’s not for the fainthearted).