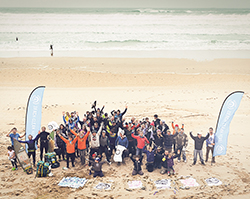 Surfers Against Sewage, World Animal Protection, Vita Coco and Protec Direct are calling for 5,000 UK beach lovers to join them for the Big Spring Beach Clean at 150 of our most iconic beaches over the weekend of the 27th, 28th & 29th of March. Set to be their biggest ever Big Spring Beach Clean, SAS are calling on the Great British public to roll up their sleeves and tackle this tideline of trash in what is a vital year in the marine litter campaign.

Beach clean events are a fantastic way of uniting and inspiring coastal communities to protect the beaches and coastal spaces most important to them, and every piece of litter removed is a victory in the fight against the marine litter crisis. Community beach clean events also leave a lasting positive legacy, with many volunteers forming new networks and beach clean initiatives to protect local beaches on a regular basis.

With 150 Big Spring Beach Cleans taking place nationwide, there’s sure to be one near you. To find your local event simply search ‘Surfers Against Sewage Events’ online or email beachcleans@sas.org.uk for more details.

A recent United Nation Environment Programme (UNEP) report estimated that 8 million individual litter items enter the marine environment every day meaning that there is now more plastic than plankton in some areas of the world’s oceans.

In response, Surfers Against Sewage is calling for a 50% reduction in UK beach litter by 2020 and recently published an action plan highlighting marine litter initiatives at community, corporate and government levels to help protect waves, oceans, beaches and wildlife from this scourge of the sea.

Intuitively, we all know that the scale of the marine litter crisis requires urgent action and are familiar with the most frequently found items of litter on our beaches from plastic bottles to cotton bud sticks, cigarette butts to plastic bags. In response to the Government’s call for more marine litter evidence, Surfers Against Sewage is also launching a new marine litter-monitoring App, to complement its campaigns and community beach clean initiatives. Working closely with the European Environment Agency and community volunteers nationwide, Surfers Against Sewage will be collecting evidence at beach cleans to strengthen the case for increased action to reverse the marine litter crisis.

Surfers Against Sewage’s Marine Litter Watch app is easy to use, loaded with hundreds of litter items found on European beaches and features a handy top 20 of the commonest items of litter you’ll find on UK beaches. Surveys can be carried out with the Marine Litter Watch app on the beach and, once complete, users simply enter a unique Surfers Against Sewage code and upload the data to the web. This will feed into SAS’s unique dataset, allowing them to identify trends and priority areas to develop community initiatives and new campaigns.

Surfers Against Sewage would like to thank lead sponsors Vita Coco, World Animal Protection and Protec Direct for their support in making the Big Spring Beach Clean possible. SAS would also like to thank Klean Kanteen and Saltrock for their ongoing support.

Dom Ferris, Project Manager at Surfers Against Sewage says: “Each year we are blown away by the commitment and passion of our coastal communities, 150 Big Spring Beach Cleans is amazing! This year we can and will draw a line in the sand in the battle against marine litter”

Chris Wyer, Brand Manager at Protec Direct says: “The work undertaken by SAS cannot be underestimated, and we are proud to support such a great cause by equipping the volunteers and taking care of their safety. 150 Big Spring Beach Cleans is an amazing effort, and the coastal communities of Great Britain are a true inspiration for their continued support to this vital cause.”