Should SMSTS be scrapped

Posted by Chris Broughton
on 5 August 2014 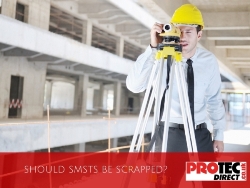 The Site Management Safety Training Scheme, also known as SMSTS for short, was devised to help site managers and potential site managers to develop knowledge, awareness and understanding of their responsibilities on site. These included areas around legal requirements, health and safety, and welfare on site. For those who work on sites it is one of the most highly respected qualifications, with many employers insisting that their site management staff hold the qualification.

However, whilst the idea behind the qualification is sound and laudable, there is now some controversy about the ongoing usefulness of the SMSTS scheme. Many people now seem to think that the SMSTS has outlived its use and should be scrapped in favour of a new scheme.

This is largely because of a number of key reasons that its critics cite on a regular basis. Firstly, it requires little or no site experience in order to get a place on the course. That means that complete novices or people who have barely been on site before can take the course, pass and be qualified to manage sites. This is understandably unpopular among people who work and have experience on sites. Similarly, another complaint centres around the fact that those who provide the course are also lacking in experience.

Some people claim that there is a pressure put on the course providers to pass those taking the course - something the 98.5% pass rate may attest to. Which may be seen to be cheapening the role of the site manager. And as anyone who has worked on a site knows, a poorly trained site manager can be a danger to all who work there.

It is also thought to be very expensive, and is often too much for individuals to afford by themselves. The course costs around £600 but if you factor in the week off work to attend, plus hotel bills, transport, food and accommodation, it can be a very expensive exercise for many people.

Further criticism centres around the fact it seems to work directly against CSCS (Construction Skills Certification Scheme). While most sites require that operatives carry the relevant CSCS cards, it is only the site managers who require the five-day SMSTS training.

Another major complaint is that the course does not have a set criteria, only a suggested timetable. This means that your experience and learning depends largely on who is delivering the course and that no two courses are ever the same. There seems to be a lack of standardisation within the course programme.

Site management is a very important skill and one on which whole sites depend for their safety and wellbeing. While it is clearly a good idea that there exists some kind of regulated or standardised certification for those carrying out the role, there are doubts as to whether the SMSTS can still carry out this function. We should stress that there are plenty of people who still think it is more than adequate. You only have to visit the HSE forums to see this. However, with such an important qualification under discussion, it is worth further investigation into whether the SMSTS is still suitable. And scrapping it altogether may be one option.