PPE and 3D printing: the future 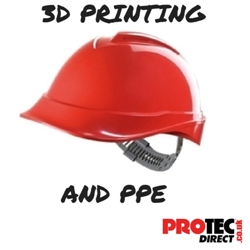 It may sound like something from a futuristic sci-fi movie, but 3D printing is actually quite straightforward and has been in use for a number of years now.

The technology has developed steadily since it was invented by Charles Hull in 1984, to the point that 3D printers are now commercially available. Many experts predict the market will reach over $8 billion globally by 2020 and that 3D printing will jumpstart a “third industrial revolution”.

What is 3D printing?
The 3D printing process involves creating solid, three-dimensional objects by laying down successive layers of a material, such as nylon, plastic or metal. Each printed layer is a thinly-sliced, horizontal cross-section of the eventual object. This method is better known as additive manufacturing and has been used in various forms for decades.

In the 2D world, if you want to print something onto a sheet of paper then you need a computer program like Microsoft Word to design it first. A 3D printer also needs instructions for what to print. This is done using a 3D modelling program to create a Computer Aided Design (CAD) file, either from scratch or using a model from a 3D scanner, before the software slices your design into thousands of horizontal layers to be printed individually. The actual printing method varies, but the material is usually sprayed, squeezed or otherwise transferred from the 3D printer onto a platform.

What can 3D printers make?
From clothing and housing to food and human body parts, the potential uses for 3D printing appear to be endless and revolutionary.

Ears, kidneys and skin have already been successfully printed by scientists, NASA is funding 3D-printed food in order to feed astronauts in space, while people have been arrested for possessing firearms created by a 3D printer.

The architecture and construction industries are also drastically changing due to 3D printing. Models of complex architectural drawings can now be created quickly and inexpensively, while huge 3D printers are producing concrete structures, with the aim of someday printing entire buildings.

What does 3D printing mean for the PPE industry?
This ability to instantly print products of any shape or size, as and when they are needed, will both challenge and complete traditional mass manufacturing processes. This includes the production of Personal Protective Equipment (PPE).

Most PPE products are currently mass–produced in an identical format, but it is now possible to customise these with an industrial 3D printer. For example, safety helmets have already been printed based on 3D scans of an individual’s head. It doesn’t actually matter if one item or one thousand are produced using 3D printing, as the price of production per item remains the same. And as these costs start to drop, mass manufacturing using 3D printers is expected to grow.

Industrial 3D printers can also use as many as 10 materials at a time to make complex, multi-component objects at a relatively cheap cost. This means there is the potential to use new materials of varying degrees of transparency, flexibility and strength to create safer and more resistant PPE equipment.

However, 3D printing does raise some social, ethical and environmental issues and the impact of these machines have not yet been studied extensively.

As 3D printers are set to be more readily available in the coming years, there will be an obvious issue regarding intellectual property and trademarking. But the larger issue involves responsibility of the actual printed products, as there are extremely strict quality control and testing regulations to follow when manufacturing. For example, if a person is injured in the workplace whilst wearing eye protection that they printed using a 3D printer, who is responsible?

Whatever the future may hold for 3D printers, there is no denying that the technology has the potential to transform the PPE industry, and every other industry that ends up using them.